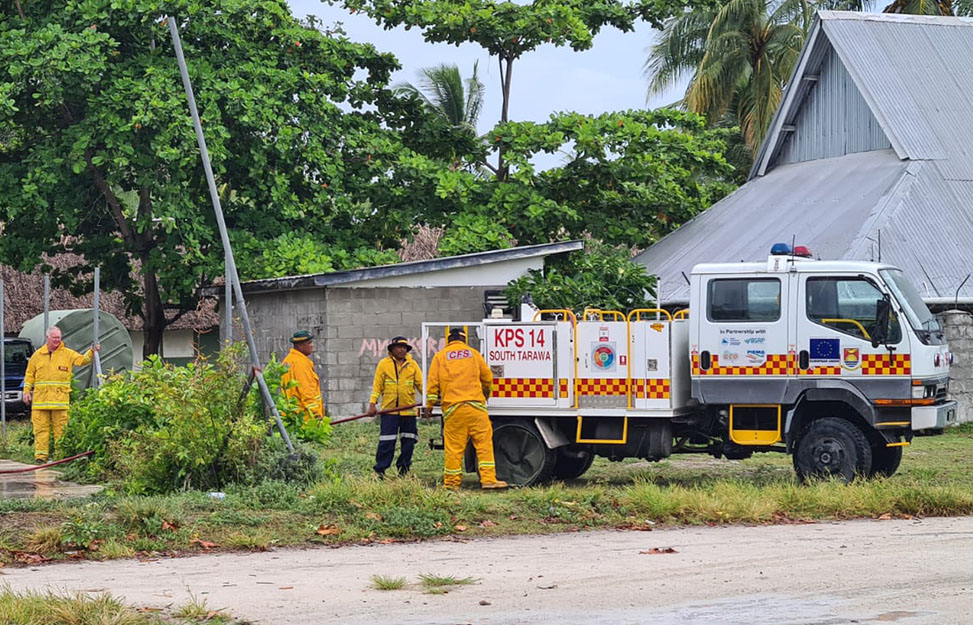 That was the feeling among the SA Country Fire Service (CFS) delegation, who made a long-awaited trip back to Tarawa in the Republic of Kiribati in October.

The visit was part of the CFS' partnership with the island nation to help them develop a self-sufficient fire and emergency service.

To date, the partnership has resulted in about 50 Kiribati government personnel receiving basic firefighting training, along with vehicles and equipment to support the program.

The partnership has been in place since 2017, and despite the impacts of COVID 19 on worldwide travel, the CFS has continued to provide much needed equipment in the form of spare parts for fire trucks, webcams, computers and mobile phones.

“Local communities have also gained a better understanding of dealing with fires and emergencies that impact the island.

"I feel overwhelming satisfaction with the progress they've made.”

Mr Davis said the training pathway is adapted from CFS volunteer training but contextualised to the Kiribati landscape and emergency response needs.

“On the next trip we will move onto offensive firefighting which includes structure firefighting and road crash rescue, as well as training in the management of emergencies and disasters.”

CFS State Training Officer Rick Jarvis said he was proud to see previous training being put into action with a demonstration at a local school. This involved a simulated fire and an evacuation of 900 children.

By following the steps provided during training, the firefighters were able to respond, extinguish the fire and keep all of the children, teachers and guests safe; as well as showing their communities how their training will assist in keeping them safe.

"This great effort was witnessed by members of the President's office who were more than impressed with the progress,” Mr Jarvis said.

CFS Acting Regional Operations Fleet Officer Josh Jeffree said being able to support Kiribati Mechanics to understanding the intricate workings of the fire trucks, including pump systems, meant that it could ensure it was working towards longevity of these valuable assets.

“It allows for us to build trust and working relationships that ensure we are able to continue to communicate provide support if there are any issues while we are out of country,” Mr Jeffree said.

Kiribati is currently in the grips of a crippling drought, with the Kiribati government declaring a state of disaster in May this year.

Mr Davis said water restrictions in effect across all of Kiribati's 33 islands means the firefighters must ensure water conservation is at the forefront of any actions they undertake.

"Everything has dried out increasing the risk of bushfires in certain areas,” Mr Davis said.

"By following the techniques we’ve shown them they have an ability to minimise water usage."

The benefit from the SA Country Fire Services work is two-fold. Training these firefighters helps to protect the vulnerable communities of Kiribati and provide tangible skills to the trained personnel.

"I take my hat off to them - they are so appreciative for even the little things we teach them and the support we give them," Mr Davis said.